On the occasion, the Governor said that Himachal is beautiful State and the people were hardworking, developing and contented.

“There is a lot of purity, innocence and belongingness in the mind of people. It’s very emotional moment for him. I am taking with me the sweet memories of the immense affection of the people of the state”, said Dattatraya.

He added that during this period he has got full cooperation from all sections, all political parties, social, cultural institutions and all organizations and all officers and employees of the government.

Shri Dattatraya said that Himachal was on the path of rapid development and the government was doing good work under the able leadership of Chief Minister Shri Jai Ram Thakur. He said that he visited different parts of the State and he has experienced the knock of development in last corner of the state. He said that it has been his endeavour to focus more on tourism, skill development and technology. Health resources have to be further strengthened in future and it has to be strengthened to the rural areas, he added. He said that the State should pay more attention especially to the environment. The forests here were the beauty of the state, so the green cover should increase, he advised.

Chief Minister Jai Ram Thakur said that the State was fortunate to have benevolence, blessings and guidance of Bandaru Dattatraya during his one year and 10 months tenure as Governor of Himachal Pradesh. He expressed hope that the outgoing Governor would have also had pleasant experience of this small hilly State.

Jai Ram Thakur said that the State and its people were proud to have a virtuous and ‘karma yogi’ personality like Bandaru Dattatraya as Governor of the State.  He said that the Governor has left an indelible mark in minds and hearts of the people of Himachal Pradesh.  He also thanked the outgoing Governor for the love and guidance that the State received from him and also prayed for his good health and long life. 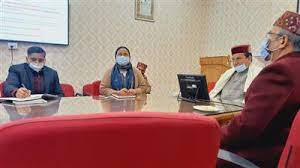