The Minister of State for Communications, Shri Devusinh Chauhan held a bilateral talk with Deputy Minister of Digital Development, Communications and Mass Media of the Russian Federation, Ms. Bella Cherkesova on the sideline of Plenipotentiary Conference 2022 of International Telecommunication Union (ITU), in Bucharest, Romania today. 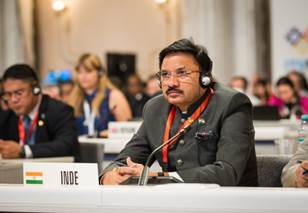 During the discussion, the Minister apprised his counterpart regarding India’s success in spreading the digital infrastructure across the country, particularly, in rural and remote areas, recent 5G spectrum and impending commercial 5G launch in India.  Shri Chauhan mentioned that entire country will be covered with 5G services in a couple of years. India has indigenously developed 4G stack and is on the cusp of development of indigenous 5G stack. Under the leadership of Prime Minister, Shri Narendra Modi, the Government of India has taken several steps to be self-reliant in advanced telecom technology including development of chipsets.  Under the Atmanirbhar Bharat initiatives, India has emerged 2nd largest handset manufacturer in the world.

Shri Chauhan stated that the Government of India has formed a Technology Innovation Group for design and development of 6G technology by 2030. He said that there are many areas where Russia and India can collaborate which include development of 5G use cases, design 6G technology, IoT, M2M, Cyber Security and developing reliable last mile solution. The Russian Deputy Minister appreciated the growth of telecom in India and she said that success story of India in the field of telecom is a great case study for the entire world. She showed keen interest in deepening the collaboration with India in the field of advanced telecom technology, security, and developing 5G use cases. 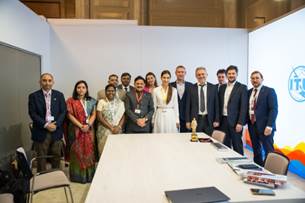 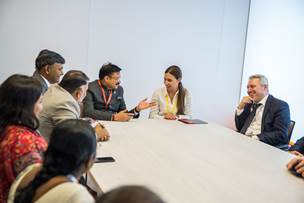 Earlier, Shri Chauhan participated in the Heads of Delegation meeting, where India has been elected as one of the Vice Chairs of the Credential Committee to facilitate elections of ITU Council and various functionaries of ITU. He also attended a very impressive and colorful inaugural ceremony  of Plenipotentiary Conference 2022, presided over by the Deputy Prime Minister of Romania.