Election Commission of India today organized a briefing meeting for Observers to be deployed for the forth coming General Election to the Legislative Assemblies of Assam, Kerala, Puducherry, Tamil Nadu and West  Bengal 2021 for which schedule was  announced on  26th February, 2021.  More than 1650 Observers today participated  in the briefing meeting physically and virtually from more than 120 remote locations also.  Officers from IAS, IPS, IRS and other Central Services  have been included to be deployed as General, Police and Expenditure Observers.

Addressing the Observers, Chief Election Commissioner  Shri Arora said that Observers are one of the most important torchbearers of Indian democracy.  Shri Sunil Arora recalled that during his tenure in ECI, since September 2017, he has been associated with 14 Elections of state Assemblies and also the 2019 Lok Sabha General Elections wherein Observers played an important role in the conduct of elections. Taking note of the exemplary  work  accomplished by the CEO and DEOs  of Bihar despite wide spread Covid concerns, ShriArora said Bihar Assembly elections have literally become a turning point in the history of Indian elections. Even the participation of voters was better than the previous Assembly and Parliamentary elections in Bihar.  Shri Arora said successful conduct of elections is always a combined feat of field officers and ECI where the Observers and Special Observers also play a vital role. He added that, during these elections, Observers will have additional role in randomization of forces and its deployment.  CEC said the resilience of Indian democracy lies in the fact that the so-said “Common Man” plays a decisive  role in Government formation. The motto of ECI is to ensure empowered, vigilant, well informed and safe voter.  He reminded the Observers that they should be visible and accessible  to citizens and enable them to vote fearlessly. He warned the observers that ECI will act swiftly and ruthlessly incase anyone is found to be lax in performing their duties. ECI shall not tolerate any willful lapses, he reiterated.Shri Arora asked the Observers to visit the Polling Booths to check due facilitation to senior citizens, Persons with Disabilitiesand women voter stoensure Commission’s commitment  toprinciple of Inclusive Elections.

Election Commissioner  ShriSushil Chandra said that in the forthcoming elections,  more than 18crore  voters would be exercising  their right of franchise.  Accounting for social distancing norms,  more than 80,000 polling stations have been added.  He said Observers need to ensure proper direction to Field-level officers so that ECI’s constitutional mandate is scrupulously fulfilled. He called upon Observers for their active interventions and presence which could enable in building confidence among the voters especially in vulnerable areas and make all efforts  to curb money power or vices of liquor and freebies with complete involvement of all enforcement agencies.  Mr Chandra emphasized that Observers should play an important role in making these elections totally inducement free.

Addressing the officers, Election Commissioner Shri Rajiv Kumar reminded the Observers  that their own conduct would be under scrutiny by the people, media and political entities.  The  Observers need to ensure exceptional conduct so that legitimacy and sanctity of the Election is kept  intact at any cost.  He said accessibility and visibility of Observers, quality and timeliness of response has to be ensured to establish credibility.  Shri Kumar said the evidentiary value of Observers’ reports  many a time become the key factor for ECI to base their judgment.    Shri Kumar reiteratedthat Observers need to be conversant with all legal provisions, instructions and latest circulars of ECI for effective implementation on the ground. 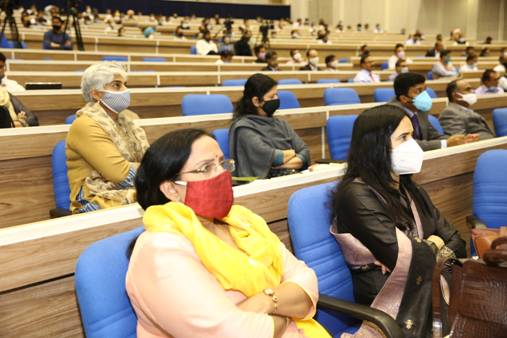 For these ensuing elections, ECI has extended the option of Postal Ballot facility to the electors who are marked as Persons with Disabilities (PwD), electors above the age of 80 years, electors employed in notified Essential services and electors who are COVID- 19 positive/suspect as certified by competent authority and are in quarantine (home/institutional). Commission’s broad Guidelines for COVID-safe election to be adhered to during the entire election processes for all persons, include increased number of auxiliary Polling stations, Thermal Scanning of all persons, Sanitizer and mask use; larger halls with adequate spacing of counting tables; Adequate number of vehicles mobilized for movement of polling personnel, security personnel to ensure compliance of COVID-19 guidelines as also vaccination for all personnel involved in electoral process.

Amid Spike In Rural Areas, Punjab Cm Asks Villages To Restrict Entry To Only Covid-Free Persons