Chief Minister Jai Ram Thakur presided over the State level Himachal Day function held at Padhar in Drang Vidhan Sabha area of Mandi district today. He unfurled the Tricolour and took salute from the contingents of Police and Home Guards.

The parade was led by DSP Pranav Chauhan.

The Chief Minister also flagged-off 136 dedicated two wheelers for women help desks at each police station of the State on the occasion of Swarnim Himachal Day function at Padhar.

While felicitating the people of the State on this auspicious occasion, he paid his respect to the freedom fighters and great sons of the soil, who strived hard to accord special identity and status to Himachal Pradesh. He also paid his respect to the first Chief Minister of Himachal Pradesh Dr. Yashwant Singh Parmar who spearheaded the struggle to accord special identity to the State.

He said that said that the State started its development journey from a scratch as at the time of formation, the literacy rate of the State was only 4.8 percent, there were only 88 health institutions, 288 kilometers of roads and clean drinking water facility was available in few villages only. He said that electricity facility was also limited to only six villages and the per capita income was only Rs. 240. Himachal today was reckoned among the prosperous and progressive States in the country having a road length of 38,470 kilometers and 14,010 villages have been connected with road facility while 99 percent of the Panchayats have been connected by roads and the remaining Panchayats would soon have road facility.

Jai Ram Thakur said that being a small State, Himachal Pradesh has shown a way to many big states of the country the credit for which goes to each and every citizen of the State. He said that in the very first cabinet meeting the State government lowered the age limit for receiving old age pension from 80 years to 70 years without any income limit, which benefitted lakhs of old people. A sum of Rs. 642.58 crore has been spent on social security pension and 1,63,607 new cases of social security pension have been sanctioned. He said that Jan Manch programme has proved a boon to the people of the State in redressal of their grievances. So far, 200 Jan Manch have been organized in all the Assembly constituencies to establish direct communication with the public and resolve their grievances expeditiously. He said that more than 91 percent of 48,694 complaints and demands received in these Jan Manch have been redressed. More than 1.20 lakh grievances out of 1,51,83 grievances received on Mukhyamantri Seva Sankalp Helpline-1100 have also been redressed.

He said that free gas connections have been provided to 1.36 lakh families by spending an amount of Rs. 21.76 crore under the Pradhan Mantri Ujjwala Yojana.  He said that 2.91 lakh women have been provided free gas connections under Himachal Grihini Suvidha Yojana started by the State government. Himachal was declared a smoke-free State in December, 2019 and has become the first State in the country to achieve this achievement, he said.

The Chief Minister said that 3.34 lakh families have received golden cards under the Ayushman Bharat Yojana launched by the Prime Minister Narendra Modi under which 77,549 beneficiaries have been provided free treatment facilities worth about Rs. 81 crore. The State government also launched Himcare for the people who are not covered under Ayushman Bharat Yojana. He said that 4.61 lakh families have been registered under the scheme and 1.25 lakh beneficiaries have been provided free treatment facilities worth Rs. 129.27 crore till date. The patients suffering from serious diseases belonging to poor families were being provided Rs. 3000 per month under Sahara scheme and Rs. 13 crore have been provided to 11,187 beneficiaries.

He said that it was not possible for any government to provide government job to all the youths and thus the government has launched Mukhyamantri Swavalamban Yojana for youth of 18 to 45 years. He said that on the total project cost of Rs. 60 lakh, a subsidy of 25 percent for men, 30 percent for women and 35 percent for widows is being given. He said that 2,700 units have been set up, which have given employment to 8,500 persons under this scheme and a subsidy of about Rs. 70 crore has been provided. He said that to ensure private sector participation in development of the State, the Government held Global Investors Meet at Dharamshala on 7 and 8 November, 2019 in which as many as 703 MoUs worth Rs. 96,721 crore were signed and the first ground breaking ceremony of projects worth Rs. 13,656 crore has also been organized. He said that Under the Mukhyamantri Awas Yojana, 4,417 houses have been constructed on which about Rs. 60 crore have been spent. As many as 12,000 new houses would be constructed under various housing schemes in the State this year, he added.

Jai Ram Thakur said that the State has received several national level awards for its excellent performance in the field of education. Himachal was ranked first in the country in the Annual Status of Education Report 2017-18 and has been awarded the ‘Best Performing State Award’ in the survey conducted by India Today in the year 2019. He said that Himachal has become the first State to distribute free text books to all students from the first grade to the eighth grade.

Chief Minister said that Jal Jeevan Mission has been launched from August 2019 and in first phase 327 schemes have been approved under this Mission worth about Rs 2,900 crores. He said that  530 schemes have been approved for the financial year 2019-20 and 696 for the year 2020-21 while about 2.12 lakh houses have been provided with tap connections. Under this mission across the country, a target has been set to provide clean and adequate drinking water to all rural households by the year 2024 and efforts are on to achieve this target in the State by July, 2022, he added.

Jai Ram Thakur said that today there were 38,470 km long roads and 2,226 bridges in the State. Under the Pradhan Mantri Gram Sadak Yojana, 1,915 km long 283 roads were constructed during the  financial year 2020-21, which was highest in all the previous years. He said that the ambitious ‘Pradhan Mantri Gramin Sadak Yojana’ started by Bharat Ratna and former Prime Minister Atal Bihari Vajpayee has proved a boon in providing road connectivity in rural areas of the State. Atal Tunnel, Rohtang which was inaugurated by Prime Minister Narendra Modi on October 3, 2020 is the result of vision of Atal Bihari Vajpayee.

Chief Minister said that natural farming was being done in 5,595 hectares under Prakratik Kheti Khushal Kisan Yojana and about one lakh farmers have adopted natural farming. He said that under the Mukhymantri Khet Sanrakshan Yojana, 3,873 farmers were provided benefits of Rs. 105 crore through solar and barbed-wire fencing. He said that special efforts were being made to promote horticulture and the production of fruits has increased to 8.45 lakh metric tons. Himachal Pradesh Horticulture Development Project of Rs. 1134 crore and HP SHIVA project of Rs. 1000 crore are being implemented in the State, he said.

Jai Ram Thakur said that whole world has been suffering from Covid-19 and our State was also no exception. He said that despite the challenges of Covid-19, with support of people, the government tried to revive the economy of the State by regulating the basic facilities smoothly. He said that health information of 70 lakh people was collected at their doorsteps under the Active Case-Feeding Campaign. He urged the people of the State to come forward to help the State Government in checking spread of this virus. He also urged the people to strictly follow the guidelines and SOPs of the State Government from time to time. He also urged the people to join the vaccination campaign along with the mantra of ‘Dawai Bhi-Kadai Bhi’ and should not take any risk.

Chief Minister announced Rs 1500 exgratia/honorarium  to all the Class III and IV employees such as staff nurses, ward boys, Class IV employees,  Asha workers etc.  involved directly  in the service of Covid patients for the month of April and May. Providing relief to the tourism industry in wake of the Covid pandemic, he announced subvention scheme for three months till  June, 2021 for tourism industry. He said that all hotels, tourist lodges, tourism units would be exempted from paying demand charges for two months and they would not have to pay late charges and could pay the same in easy instalments.

He said that demand charges would be not be levied from private schools, as they have also adversely affected due to pandemic. He also announced interest subversion scheme for transport sector so that they could also avail financial facilities. He announced 50 percent concession on SRT on stage carriage for three months from April and also 50 percent concession on passenger tax for three months on taxis and contract carriage.

The Chief Minister also honoured the parade leaders who presented march past on this occasion and later administered the oath to the people for fight against the Covid-19 and working for the progress of the State.

Sh. Manohar Lal has directed the officers concerned to ensure that the process of making payment of the premiums paid under   Mukhya Mantri Parivar Samridhi Yojana 3 min read

Sh. Manohar Lal has directed the officers concerned to ensure that the process of making payment of the premiums paid under   Mukhya Mantri Parivar Samridhi Yojana

Haryana Government has imposed a complete lockdown in the state till May 9-2021 to break the COVID-19 infection chain. 1 min read

Haryana Government has imposed a complete lockdown in the state till May 9-2021 to break the COVID-19 infection chain. 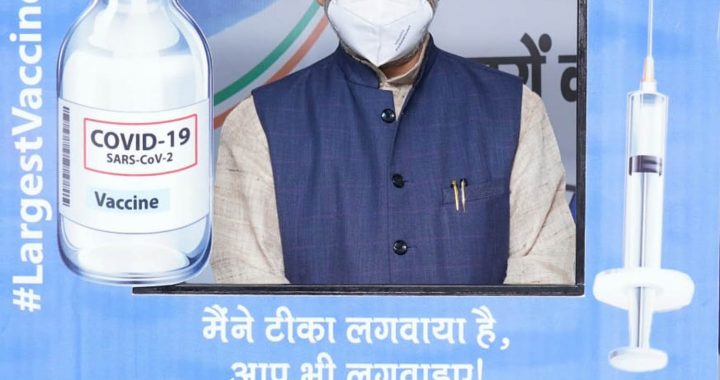 Careerera offers appraisals to their employees despite Pandemic. 2 min read

Careerera offers appraisals to their employees despite Pandemic.

Sh. Manohar Lal has directed the officers concerned to ensure that the process of making payment of the premiums paid under   Mukhya Mantri Parivar Samridhi Yojana 3 min read

Sh. Manohar Lal has directed the officers concerned to ensure that the process of making payment of the premiums paid under   Mukhya Mantri Parivar Samridhi Yojana